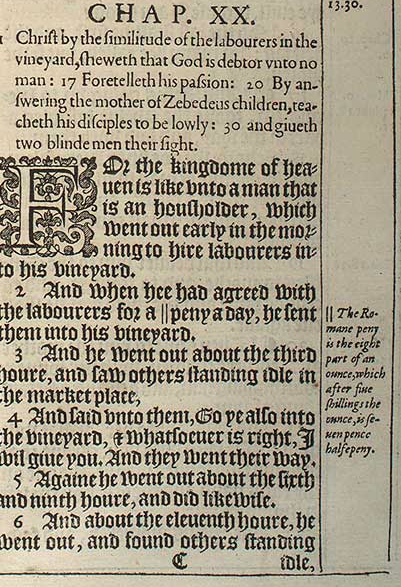 From the 1611 King James Bible

Yesterday after school I received an email about a student who has been struggling all year.  Finally, finally, finally, at the 11th hour, he will be coming for extra help during another class period.  I have been begging for this since August, but the student has resisted.  I used to get so frustrated when students would want to ask questions the morning of the quiz, or start coming for extra help a few weeks before the state test.  But those days of young teacher frustrations with students are long gone.

I am not an uber-religious person, but I was raised Catholic and live in the Bible Belt so Christianity has been and still is all around me.  Being raised Catholic, the four Gospels are some of the most important books in the Bible.  Of the four Gospels, Matthew was my favorite even when I was little and remains so to this day.  The Gospel authors equate Jesus with different tangibles so we can begin to wrap our heads around the magnitude of God as Man.  King.  Shepherd.  Light.  But in Matthew, Jesus is Teacher.  He teaches through the example of how he treats other people, he teaches by pointing out the hypocrisy in the status quo, and he teaches through parables, simple stories that illustrate a moral lesson.

In  Matthew 20:1-16, Jesus tell the story of the wealthy land owner who hires laborers throughout the day to help with the harvest.  At the end of the day, the land owner pays each laborer the same amount, even those who were hired at the 11th hour.  Of course the people who had been working all day are furious!  But the land owner reminds them that they agreed to work for “one denarius” and that is what he is paying them.

When students decide that it would be a good idea for them to start getting serious about algebra, even if it is at the 11th hour, I want to be there for them, helping them.  No matter how much data we use to track our students, nor how many levels of differentiated instruction we craft, if our students do not decide on their own to take responsibility for their learning, they will never learn in a way that will carry them forward.

I looked up the colloquialism “the 11th hour” and I realized that it doesn’t just remind me of Matthew 20:1-16, rather it IS Matthew 20:1-16.  The laborers who were hired at the 11th hour and only worked the last hour of the 12-hour shift earned the same as the ones who worked a larger portion of the day or even the entire day.  So I made a quick calculation of my own.  Students have 180 days in their academic year.  180/12 = 15.  So the 11th hour for students is 15 days before the state test.  It makes sense, then, that some students are finally finally finally ready to take their studies seriously now that we are three weeks away from the state test. 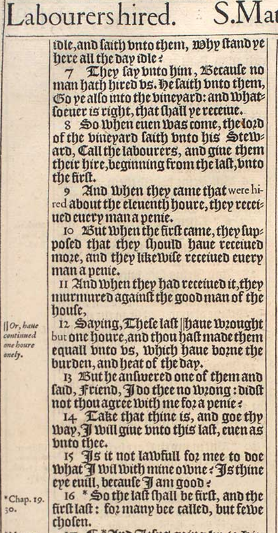 From the 1611 King James Bible