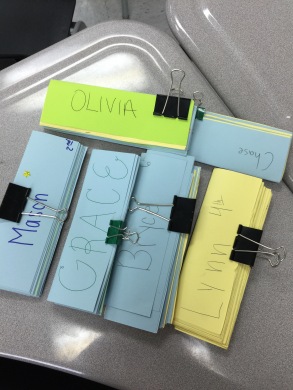 Name cards for the students in each of my six classes.

I am in my 28th year teaching and each year I try some new things because, well, the some of the old things weren’t working or weren’t working any more.  Sometimes I have to just abandon what I was doing in one or two classes mid-year and try something new.  (The Mystery Student is a recent example of that, though I haven’t needed to use it this year at all.)

This year’s new idea is so blazingly simple it makes me mad that I never tried it before.  It is something I have wanted to do for years and have done versions of it in the past, but this time I started it in the beginning and have used it each day since then in my Algebra I classes.  I feel like it has made a huge difference with my classroom atmosphere.

I read one time that when students enter your classroom they are most worried about two things:  where they will sit and if the teacher will pronounce their name correctly.  This idea of the place card solves that problem!  On the first day of school, give each student a half sheet of card stock, have them fold it in half (you can see in the picture that these were folded “hotdog” style but “hamburger” would work too) and then have them write their name(s) on one side of the table tent.  You can do first name / last name on one side and just what they want to be called on the other.  You can see my students mostly used pencil (which is harder for me to see — next year maybe I will hand out sharpies.)  You can also have them put answers to ice breaker questions on the inside such as “If math were an animal, what would it be?”  If you get a new student over the course of the year, the first thing this child will do is write his or her name on a blank table tent and then get the little packet of necessary items for your class (this might include a letter to families, a questionnaire, notebook dividers. and any current notes / assignment handouts).

We often sit in twos in my classroom but sometimes in threes or fours and sometimes in singles (quiz day, e.g.).  While one class is packing up, I just set out the names for the next class.  Sometimes I put them roughly with the same person and in the same spot where they were the previous day.  More often, I change everything up.  I always put the stronger kids towards the back and the struggling learners towards the front, but also mixed in with each other too so that it’s not as obvious.  I take into account personalities and who seems to work well together.  If someone has been absent for a while, I will partner that person with someone else who is a teacher-type.  At this point in the school year (we started in August!) I have my students’ names memorized, so I usually walk around while they are working on the warm up to pick up the place cards.  In that way, there’s less to do to set up for the next class.

My students come into my classroom and immediately look for their seat.  They never complain about where they are sitting or that someone took their seat.  The ones who walk in tardy (either excused or unexcused) have a place to go and there isn’t a show (BTW for habitually tardy students or for those who seem to get called to the office all the time, I tend to put their names closer to the door).

It makes me cringe to think of the days when all of my students sat in rows and I assigned their seats by alphabetical order on the first day of school and never changed anyone unless I had to — someone couldn’t see the board or two people needed to be separated because they were constantly talking to each other instead of doing math or we got a new student.  I have learned a lot in 27+ years.

FINAL NOTE: In AP Calculus we used the place cards for only a week or so until I had everyone’s name memorized.  Now they can sit wherever they want, and being the mature students that they are, they generally sit with a friend who they study with outside of class anyway so it works well.  But, I still have their name cards if I want to arrange them a certain way for a cooperative activity or if on test day I suspect that two people are “helping” each other — then I can use the cards to mix it up. 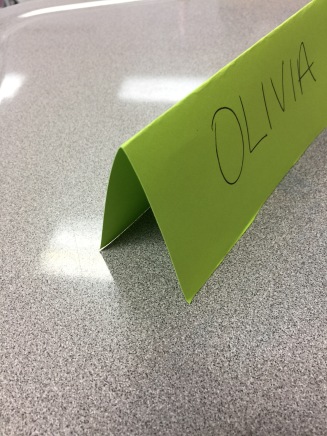 The Name Card waits for its student to find her seat.