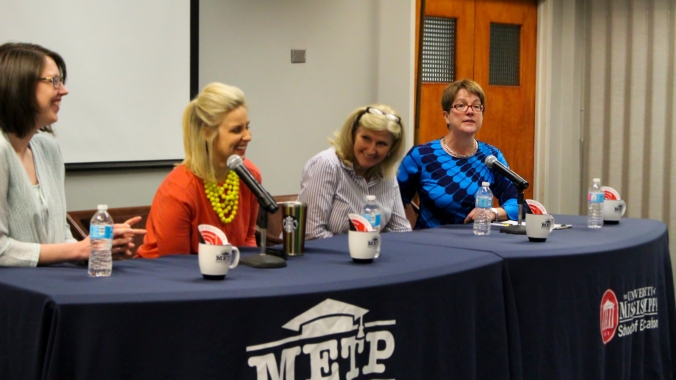 I was probably telling the story of the kid who brought baby chicks to seventh period.

A few weeks ago I got an email inviting me to be on the Teacher Panel for the Mississippi Excellence in Teaching Program (METP).  My initial thought was, “Are you out of your mind?  I can’t miss a half day of school the week before state testing?!?  And, besides, what do I have to share with first and second year undergrads?”  I thought about it for a few days and then called the program coordinator.  He encouraged me to do it and told me to think about what the best time would be for the 1.5-hour panel.  I decided that since I have first period planning, 2nd period AP Calculus (who would work well autonomously), and team teach Algebra I third period, I could sneak out and not be missed from 8:30-10:00.  So I agreed.

The panel consisted of 4 teachers, each with varying years of experience.  In the picture we are sitting by number of years.  2.  11.  19.  26.  All of us teach high school high-stakes testing classes (Algebra I / English II) in addition to other classes.  The panel was a lot of fun.  It is amazing how I can effortlessly answer questions about math, teaching, and teaching math.  It was also amazing how much slang we use which had to be defined.  IEP.  PLC.  MAP.  Every profession has its own lexicon.

The last question an undergrad asked was for us to share a funny story from teaching.  One teacher talked about a student pulling out his own (permanent!) tooth in her classroom.  As if that isn’t crazy enough, that same student found the tooth at the end of the school year in the same teacher’s classroom when he was cleaning out his back pack!  “Look Miss, it’s my tooth!”

This story triggered a fun memory for me.  It was my first year teaching in Mississippi.  I had a seventh period pre-algebra class.  This was the last period of the school day.  The students could hear the busses pull up 15 minutes before the class was officially over.  There were 26 students on the roster, but any given day there were probably only 18 there.  Where were they?  Skipping.  Checked out early.  In school suspension.  Out of school suspension.  In jail.  Ran away.  At the doctor.  At the dentist. At the orthodontist.  Having a baby.  The list goes on and on.  The students who were there were a challenge to motivate.  They were always passing notes, asking to go to the bathroom, poking each other, needing to sharpen a pencil, tripping each other, needing to blow their nose (which in Mississippi means an excuse to stand in the hall).  The list goes on and on.  Let’s just say it was a challenge to get most of them moving forward mathematically.

On Fridays I always give a quiz or a test.  On this particular Friday, the students came in, sat down in their correct seats, did the warm up problem, I walked around the room checking their work, and we discussed it.  Then I collected a random assignment (subject of a future blog post) and passed out the quiz.  They dug in (a learned behavior that I had to teach them as well) and were working assiduously on it when I heard, “Cheep, cheep, cheep.”  I looked up and around the room and everyone looked at me and then everyone put their heads back down and continued working.  This was 2000, before the time of cellphones in every pocket.  What I thought was happening was that someone had a McDonald’s toy and was making the sound to clown around.  A few minutes later it happened again.  “Cheep, cheep, cheep.”  Everyone looked at me.

“OK.  Who is making that sound?” I demanded in my stearnest teacher-voice.

“My chicks.  FFA was giving out free chicks and I am bringing these home to keep in our yard.”  He reached down into the side-pocket of his cargo-jeans and pulled out three fuzzy yellow chicks.  Of course the class was howling.

“Well.  They can’t stay in there.  They are disturbing everyone taking the quiz.  Here,” I quickly dumped out a shoe box full of dry erase markers, “put them in here.”  We got the chicks in the box and the lid on top but the cheep, cheep, cheep was still audible.  So we put the box in the hall right outside my classroom.  All heads went back down and the students resumed work on their quiz.

A few minutes later, the door swung open.  The principal was standing there.  All heads went up again, waiting to hear what he would say.  “Ms. Cornelius, what is this box doing outside your room?”

“They are one of my student’s baby chicks.  He is bringing them home.  They were making too much noise during the quiz so we put them in the hall.” 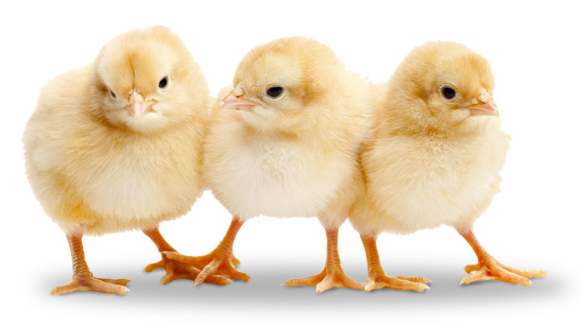